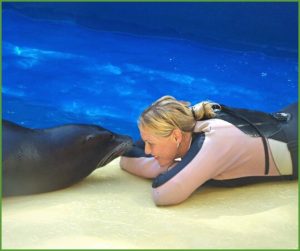 Nikki Morrison has been in the animal training field for over 20 years. Starting off working with sea lions at the age of 19, where she established a passion for animal behaviour, training and welfare.

She then moved on to become Animal Training Coordinator for a wildlife park in England, working with several species ranging from a variety of big cats, primates, small mammals and birds. She also started the UK’s first sea lion swim program and internship program here.

After a 6-month sabbatical trip, spending time researching animal training programs around Australia, Nikki went on to work with dolphins in the Caribbean for a couple of years before being asked to help start a trailblazing penguin training program in Dubai. This earned Nikki’s team several international awards and recognitions and ultimately led to an offer of work as Director of Animal Training for a worldwide zoo and aquarium consultation company.

At the peak of Nikki’s career, however, sadly, she gave up her role to move back home and care for her terminally ill mum. During this time, Nikki also supported re-evaluating a local sea lion facility and operation, which led to a new pool and advanced research on stereotypical behaviour in sea lions.

Nikki is now working with Guide Dogs for the Blind, supporting the puppy development operation in Scotland and Northern Ireland, as well as running her own consulting business to continue her passion for supporting zoological facilities to integrate animal-centred training programs that positively impact zoo operations in many ways but most importantly, the lives of the animals and their primary caretakers.

“Don’t judge a penguin by its ability to climb a tree”, IMATA presentation on considerations when implementing a penguin training program