How to deal [emotionally] with emergency vet visits!

It all started when I was pet sitting a lovely 7-month-old puppy named Teddy. He is a very affectionate, easygoing boy, and it was easy to forget that he is still a puppy! 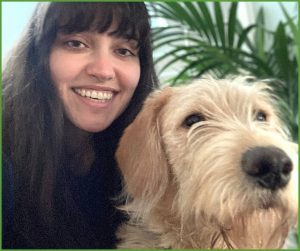 On a Sunday [of course – it had to be Sunday!], he started to wander around when I was still asleep. I opened my eyes for a second, but he seemed okay, so I fell asleep again. When I finally woke up and checked what he had been up to, I found out that he was chewing on something in the corridor. Upon inspection, it turned out to be my thyroid medication! He destroyed the blister of tablets leaving only two untouched, many crumbles on the carpet, and not even the whole blister pack – he must have swallowed that too! I have to say I was horrified, I’m not sure how bad thyroid hormone can be, but I’m sure it shouldn’t be messed with, especially for a young puppy!

I first called a friend who lived in the same city and asked if she knew a vet who works on Sunday. She gave me the name of the vet and offered that she could give me a lift. I called the vet but was pointed to another one, and finally, I got an appointment. My friend gracefully waited those few minutes for us despite being late for work. She gave us a lift and then needed to go. I had no idea how I would get back home with the dog, but it was not the time to worry about it! In the car, I also noticed that my phone battery was running low! I charged it a little bit with a car charger and hoped for the best! 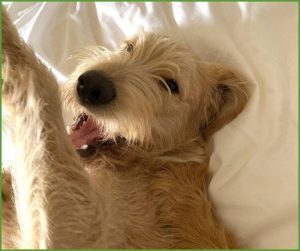 When I got to the vet, they took him and asked me to wait outside because of Covid. They gave me a form to fill out. I needed to wait outside in the wind, getting cold, but while doing so, I was also googling how I might get a taxi or Uber with a dog? Someone recommended getting an Uber and calling the driver to ask if it’s ok to take a dog. I decided it would be a good option and waited for Teddy.

When the vets came back with Teddy, he was as happy as usual! They gave him an injection to make him sick, but it didn’t take long before he returned to his usual self! They didn’t even find much of the pills, really, just a little bit of the silver thing from the blister pack.

Eventually, it came time to call an Uber. When I asked about the dog, the first driver said he was on his way already and would come soon. I thought it was ok to go with the dog, but when he saw Teddy leaving some dirty marks in his car, he asked me to leave, telling me that it was not his car and he could not do it. He asked me to cancel the ride, which cost me £6…

The second driver picked up the phone and said that he could not take the dog because other passengers could be allergic, but at least this time, it didn’t cost me a cancellation fee. My battery was getting stressfully low. That was the first time I had tears in my eyes and needed a moment to think of some other options. I gathered myself, talked with a security guy and explained my problem. He gave me three numbers for taxis, but they also refused to take dogs.

Eventually, I googled pet-friendly taxis in the area, and I found one that I could book specifically to go with a dog. It was three times more expensive than Uber, but at least I knew Teddy would be allowed. Unfortunately, they told me I needed to wait 25 min. I felt freezing cold at that time, so I hid from the wind and did a little training with Teddy as he started to run around and jump on me, which I labelled as “boredom”. The taxi driver came in less than 20 min in the end, and I kept Teddy on the car’s floor. He is the best puppy ever as he very quickly just fell asleep!

When I came back home, I had some breakfast and coffee and needed time just to sit and do nothing. I cried for a little while, talked with some friends, and gave the owners a more detailed description of what happened. And Teddy? He was as happy as always, utterly oblivious to the horror I just went through 🙂 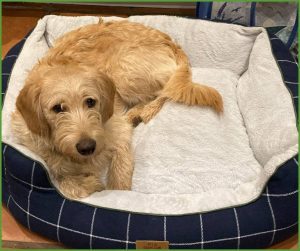 The owners called me to make sure I was ok! They said they were not worried about Teddy as they knew I took good care of him! But they worried about my medication and if I’ll have enough left! How kind of them?!

What have I learned throughout this whole situation? Well, obviously, always double-check if your medication is out of the dog’s reach! Secondly, everything is figure-out-able if you only keep working on one task at a time. I was focused on what I could do next and kept on taking one step after the other. Even though it was stressful, I stayed calm most of the time! After it was done came the time when the emotions hit me, but before, I was laser-focused.

I needed some time to forgive myself as I felt guilty for putting my meds on a nightstand where he could reach. I never saw him going to the right side of my bed where I left it, but that’s not good enough as an excuse! Eventually, I came to terms with it but became hyper-vigilant before I go to bed. Making sure nothing dangerous is in his reach is my absolute priority!

I was quite surprised that I remained reasonably calm in this situation. I didn’t let my guilt take the best of me – I had important things to figure out first. It showed me that I could deal with life adversity even if it is emotionally challenging. I believe that’s a good skill to have. What do you think?